The Town Krk is the administrative, political, economic and religious center of the island of Krk. From the earliest times, the town of Krk has been the historic and cultural center of the island. According to last census in town Krk live almost 6000 people. The city is ancient, being among the oldest in the Adriatic. It has been continuously inhabited since Roman times and was once part of the Byzantine Theme Dalmatia after the Roman Western empire had fallen to the barbarians. Krk was an important settlement for the Romans and you'll see Roman ruins in the city walls and a Roman thermal with a hypocaust dating from the 2nd and 1st century BC.

The early Christians left a 5th century basilica, now incorporated into the cathedral. The Krk Cathedral is the central headquarters of the Diocese. This triple nave old Christian basilica (5th century) with the Romantic Church of Saint Quirinus (12th century), the protector of the Diocese; the bell tower (16th century) with an angel holding a trumpet on top; the Chapel of Saint Barbara and the early Christian baptistery and apse (5th-6th centuries) all create a unique religious complex. Today’s Cathedral is the result of numerous renovations and expansions. The oldest of the town towers is the square one on Kamplin which dates from 1191. Most of the other walls and bastions were erected in 1407. At that time Krk was ruled by the Frankopan dukes, the most powerful nobility in medieval Croatia. The last Frankopan put Krk under the protection of Venice in 1480 where it remained until 1797.
Every year  From 7 till 9 August in city of Krk is traditional feast and these are the best days for visiting town. All city becomes big market place and we recommend visit to the local galleries and shops with authentic souvenirs. You can enjoy many programs staged in the natural venues of this ancient city, immerse yourself in the mysticism of the medieval era in Krk princes Frankopan square and try the local culinary specialties.

Main city beach is called Porporela (awarded with Blue flag).  This pebble beach is located on western part of the city, towards the campsite Jezevac. The distance from the Krk town to beach is only 5 min by walk.  There are many other beaches also Blue flag quality between city center and Hotel Koralj. Mostly beaches are pebble or concrete with sand in the sea suitable for children.

Center of nightlife in Krk is in following bars in city center:
- cocktail night lounge bar Volsonis
- disco bar Jungle
- night club Casa del padrone
During the day it is easy to find many excursion boats in the port. Most interesting excursions are; Island Prvic, Rab - island south from the Krk, Goli otok – former communist jail. Interesting excursion is also with semi submarine from port Krk. It do not dive below the sea surface, it has an underwater cabin with large bulletproof glass windows, which is located 1.5m below the sea surface.
Center of the city is covered with free wireless Internet. 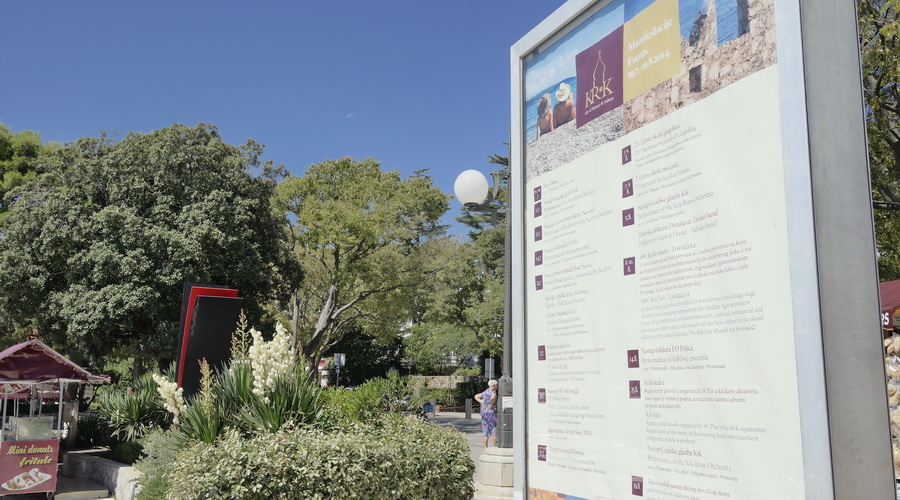